This past weekend, I led a small group of caregivers in a discussion about their wounded service member. As an advisory board member of Tee It Up for the Troops, a nonprofit organization dedicated to using the game of golf to heal wounded warriors, I was asked to put together this discussion to talk about my experiences as a Purple Heart spouse and to open the door for healing. The 90-minute session went well over the time allotted, and we had to delay the yoga portion of the session for the next day! The takeaway was something I already know from experience: being a military family caregiver is hard, and being a caregiver to a wounded warrior dealing with post traumatic stress disorder (PTSD) and traumatic brain injury (TBI) is harder than you can imagine. The Nation’s focus on the service member and veterans – There are many programs available for service members and numerous organizations that support veterans. Some help with educational scholarships and employment, while others provide direct services such as housing. What we know is that an unhealthy veteran or service member cannot take good care of themselves nor will they be able to financially provide for their family. Alternative options such as yoga offer a mechanism to help the veteran and military service member get healthy. Strides in this area, like the White House’s Joining Forces Initiative and Mindful Yoga Therapy for Veterans, continue to increase. Still, the military family has to be an integral part of the total equation. How the military spouse/parent/caregiver is the glue for the entire military family and military community – If there is no family support for the service member, then he or she have a significantly difficult road ahead. A military spouse has to manage the entire household and if there are children involved, they instantly become a single parent. And if the service member becomes injured with visible and/or invisible wounds like PSTD or TBI, the role of the family member becomes paramount to the outlook of the wounded veteran. Often when this happens, as it did with me, the military family member neglects herself or himself. Military spouses need to care for themselves first: in speeches I’ve delivered I used the airplane oxygen mask analogy – put the mask on yourself first and then on your child – which means that you have to take care of yourself before anyone else in order to be more available for the service member. My Top 3 Things NOT to say to a military spouse or family member So far you may be thinking about military families differently, as I’ve presented some issues to ponder. What follows is a short list of what not to say to military families. This list in no way encompasses the numerous things that have been said to military family members (including me) but these are my top three:

Things to do for military families Still don’t know what to do?  Ask friends, family and coworkers about local service members that are currently deployed or have been wounded. Link up with the families. You will be surprised at how close a military family may live to you.

Some of my suggestions may be common be common sense as you may have already thought of them, or they may not be your cup of tea, so I encourage you to create your own or volunteer with a military family organization. The truth is that helping a military spouse and family is not difficult at all, as long as you understand their immense contribution to the military and to the nation.

Pamela Stokes Eggleston has practiced yoga for over a decade and recently completed both her 200-hour yoga teacher training and prenatal yoga training in the Pranakriya Yoga tradition. She is continuing her yoga teacher training through the 500-hour Pranakriya program, and has completed the Mindful Yoga Therapy for Veterans (MYT) Training in 2012 to work with service members and veterans with post traumatic stress disorder (PTSD) and combat stress. Since 2004, as caregiver and spouse of an Operation Iraqi Freedom (OIF) wounded warrior with post-traumatic stress (PTS) and traumatic brain injury (TBI), she has been a strong and vocal advocate for service members, military spouses and veteran families. Pam is the Founder and CEO of Yoga2Sleep, LLC, ambassador for the Give Back Yoga Foundation, and serves on the support staff of Mindful Yoga Therapy for Veterans.

My name is Chris Eder…and I’ve spent the past 23 years on active duty service to THE United States of America as a Combat Correspondent in the Air Force.  Since 9/11, I have found myself in some interesting places.  Sometimes by myself, sometimes with people I had never met, and sometimes with people who I love(d) as a brother or a sister.

I don’t sleep.  For many years, I just told people I was a “morning” person.  That was maybe less than half true…as I really do enjoy being up before anyone else.  Hot showers, fresh coffee, etc.  But the truth was…I couldn’t sleep.  I used to spend as many hours as possible working.  People thought it was because I was a hard worker.  OK…they were right!  However, as I have learned over the years…working hard is also an unhealthy coping mechanism.  Avoidance!  It is hard to tell something is wrong when you continue to out-perform everyone!

In 2003, I found myself traveling throughout Iraq by any means possible.  I was equipped with a 9mm, no ammunition, a flak vest I think my dad wore in Vietnam, and my camera gear. For a short period of time, I called the Al Rasheed Hotel home.  That is until Oct 26, 2003 when insurgents attacked it with 68mm and 88mm rockets.  Under Secretary of Defense Paul Wolfowitz was in the hotel that night. Check the story out, Sec Wolfowitz is wearing my flak vest! Things got worse after my second deployment to Baghdad during the “Surge of Operations.”  Damn…the insurgents had our location dialed in!  20+ attacks a day seemed “normal” for so long.

So…why yoga?  Hell…why not?  What is the worst thing that can happen?  I started yoga back in 1999 because of a pinched sciatic nerve and a diagnosis of Adult Attention Deficit Disorder.  I instantly was hooked! During my 2007 deployment to Iraq, I was actually teaching 5-6 classes a week.  Anyone…and I mean anyone… can do yoga.  I introduce to you Lieutenant Colonel Tom Bryant.

Lieutenant Colonel Bryant, US Army is my friend/mentor and hands down the best person to ever come from Alabama. LTC Bryant is the last person I thought would try yoga.  He is a typical Southern conservative, “Roll Tide!”-preaching, family loving, church going, hunting/fishing military kind of guy.  He would often poke fun of me when we worked together about how I taught and practiced yoga.  Tom recently sent me a Facebook message:

“Are you sitting down? You should.”

Last night I did yoga. And since I’m deployed, you know I wasn’t drunk or high. It lasted 20 minutes, was called relaxation yoga or something like that. Really just seemed like a lot of stretching to me, but this Japanese guy with a ponytail on the video kept talking about “seeing your breathing” and “step mindfully downward on your heels” and a bunch of other platitudinal crap I didn’t understand. But the stretching stuff was cool.”

Even this staunch yoga antagonist found yoga to be at the very least, “cool!”  There is a good chance what you think Yoga is…is not at all what it really is.  Yoga can be whatever you want it to be…killer workout, awesome stretch, or a time to reset and restore your batteries.  For me, I *try* to start every day with 15-30 minutes of meditation and yoga.  I also end each day with some grounding breath work to help clear and prepare my mind for sleep.  Trust me…I know it sounds fruity, crazy, or even esoteric…but IT WORKS!

I’ve been practicing yoga since 1999 and teaching since 2007.  I often wonder where I would be today without yoga.  I see my brothers and sisters-in-arms who share *our* nightmares, panic attacks, alertness, relationship issues, memory problems…the list can go on forever.  I know just how tough my life is…and wonder how much tougher and often debilitating it would be without yoga in my life.

YOGA helps by reducing your anxiety levels.  For many of us Vets…that should be enough!  Specifically, the tools and techniques leveraged in the Mindful Yoga Therapy for Veterans with PTSD, (MYT) it soothes the inner tiger.  MYT is an embodyoga®-based, empirically informed, clinically tested program comprised of five practices: Pranayama (breathing), Asana (postures connected with breath), Yoga Nidra, Meditation, and Gratitude. Each practice is a tool Veterans can use to cope with Post Traumatic Stress, and together, they form a comprehensive system–a toolbox–that will carry Veterans into a life of strength and resilience. These yoga practices don’t cure PTSD…rather, they create a place where healing can begin.

Think YOU can’t do yoga?  Think again!  You probably can’t run a marathon either…but if you wanted to, you would start of slow.  You should do the same thing with yoga.

For me, MYT has been a game changer.  There are many different styles of yoga available.  I like all of them too!  Each style of yoga is based on a set of accepted and foundational precepts of Hatha yoga.  However, not all yoga is beneficial to Veterans struggling with trauma.  The five practices that comprise the MYT tool-kit specifically target your parasympathetic nervous system (PNS).  Many Veterans suffering from PTSD have an over stimulated sympathetic nervous system (SNS).  This is the flight or fight system…very important to have engaged during war…but not very helpful to be engaged when you return…or…constantly engaged for days, weeks, months.  These MYT practices will help greatly (have worked greatly for me) at reducing an over-stimulated SNS.

My favorite tools are the breathing tools.  They have the greatest impact on ‘chillining’ me out.  How can something so simple do so much?  How can something we take for granted (usually until our last breath) be so effective in our recovery?  Just for fun…I’d like for you to stop breathing for 20 minutes. What…you can’t?  You think you might die.  I agree!  So…public math here…if I can increase both the quality and quantity of your breath…would that not increase the quality and quantity of your life?  Check out this free sample from Suzanne Manafort.

Chris Eder is a certified Vinyasa/Hatha Interdisciplinary Yoga Instructor, journalist,  and Director of Communications for MYT. His yoga journey began in 1999 after he encountered the joys of a pinched sciatic nerve and a diagnosis of Adult ADD. A friend introduced him to yoga as an alternative to pain pills and other meds. When not teaching yoga, he is working on his seva project, MalaforVets.

Some Recent Photos from Chris’s Practice… 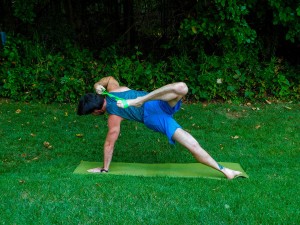 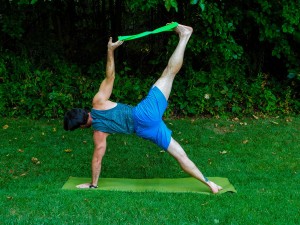 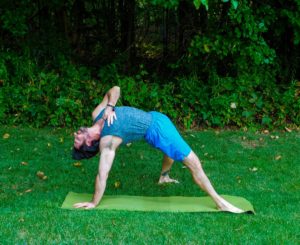