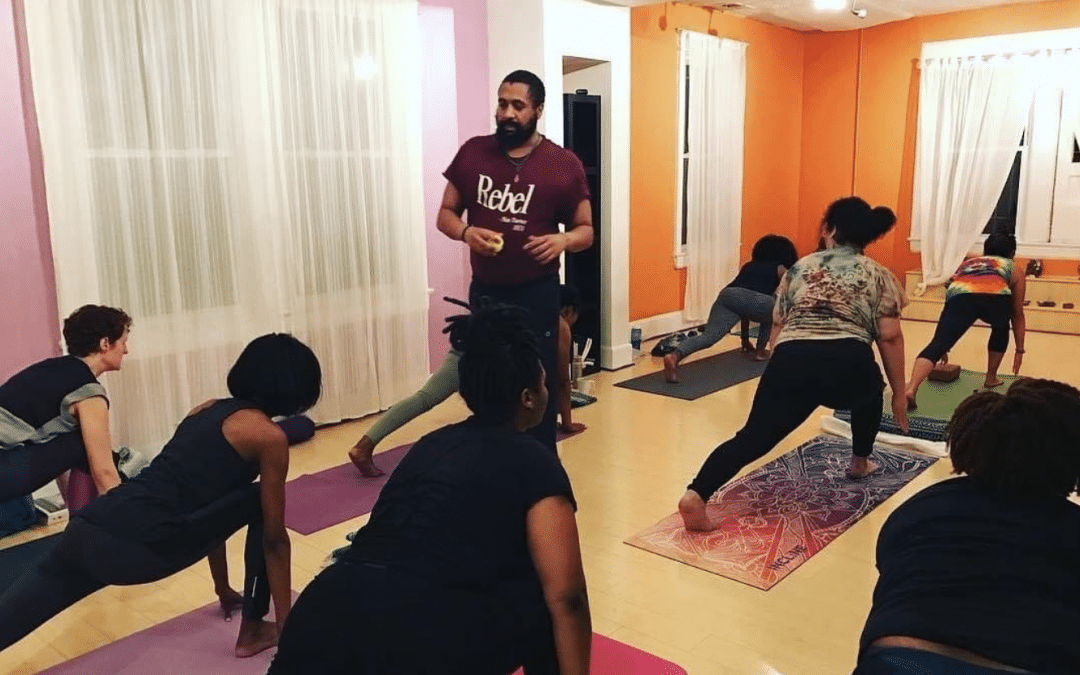 The world isn’t the same as it was the last time we were able to come together in mindful community, and the programming team at SYF, led by Director Reggie Hubbard, is determined for this year’s conference experience to mirror that. “We’re ??seeking to diversify programming not just in terms of the presenter,” says Reggie, “but also in creating opportunities for cross pollination and formalizing that. Rather than simply giving presenters and practitioners an opportunity to come together and be consumers of a product, be co-creators as we emerge from whatever we’ve been through to wherever we’re going.”

This looks and feels different than your typical yoga festival with all familiar faces in the lineup. The theme for SYF 2022 is Give It Up For Grace, and Reggie says that weaving in the idea of grace is integral to what he’s aiming to create. That looks like “giving space to collaborate and connect,” he says. “It looks like giving space to get your CEUs, of course, but also giving you the space to lay outside in the sun, to dance.” This, he says, more embodies the totality of the practice of yoga. It’s not just about running from one class to the next and checking off boxes of experience. It’s about creating a feeling of expansiveness, a space for healing.

How 2022 Will Be Different — And Different From Other Yoga Festivals

One way that this is built into the SYF experience this year is in the place itself. Because the event is being held entirely outdoors in the majesty of Posse Grounds Park, there will be more time between class sessions to relax and integrate. With 360 red rock vistas and the openness of blue skies overhead, the container itself is a player in the experience of SYF this year. “Holding space in wide open space — in these times that have been so congested and constricted — there’s an opportunity for spaciousness; an opportunity to acknowledge the grief we’ve been through,” says Reggie. “This is the space for people to come together in a way that serves our collective regeneration.”

Another way that this healing will be made possible is by the diversity of the presenters — in all senses of the word. Not only is SYF working to prioritize underrepresented voices in the yoga event space, “part of it is bringing people who have never been to Sedona to Sedona and having that mash up with the locals,” says Reggie. “I’m imagining what a meditator from Brooklyn who works in prisons can share and create with a person from Utah who does mindful yoga in prisons,” he says.

One of SYF’s signature offerings is the Yoga for PTSD Training. While the festival will continue this unique signature offering, it will be slightly different this year — a trauma-informed training led by people of color. “Viewing trauma from a more holistic sense, as it pertains to all of us and rendered by people coming through the lens of compassion and service is super powerful,” says Reggie. It’s another way that grace is taking center stage at SYF, as well as the recognition of shifts that have occurred in the wake of 2020. Details are still being finalized, so stay tuned for more information coming soon!

Why This is Important Now

The time to embrace the changes that we’ve collectively experienced is now. “If we haven’t noticed,” says Reggie, “the ways in which we’ve done things in the past are no longer working. The only reason we think they work is because we’re addicted to them. As systems fade away, it’s incumbent upon people to create new norms.”

As leaders in the mindfulness community, SYF is stepping up to do just that. It’s not just about holding space — but about fostering creativity. In the creative flow, we learn not only other ways of doing, but of being. “The playbook is finding community, finding our latent connectivity — and then using community and connectivity to foster creativity.”

Come co-create with us this June, and be a part of the paradigm shift. Tickets on sale now!