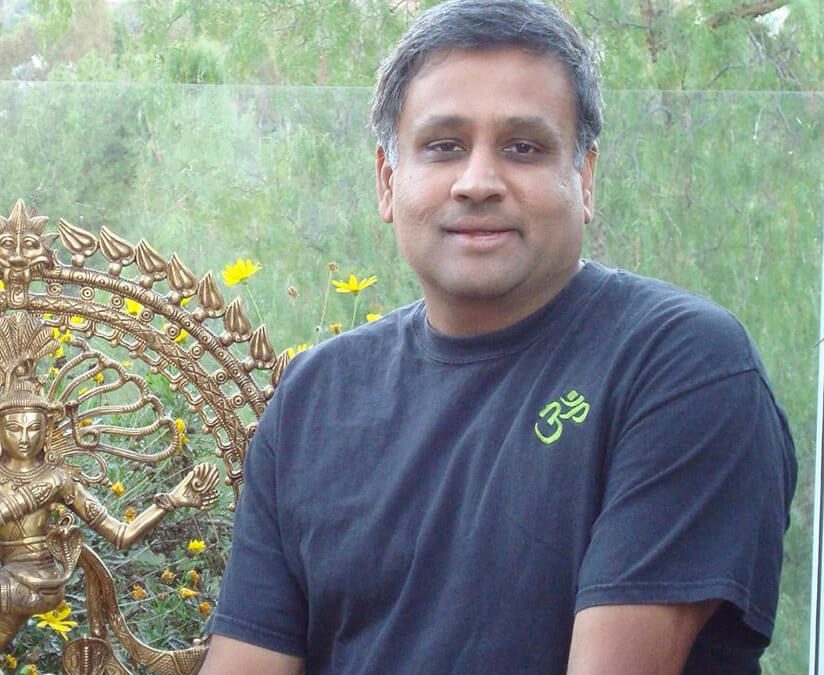 Telling stories is Manoj Chalam’s calling. He started importing Hindu statues to the U.S. 21 years ago, and it wasn’t long before the job morphed into one that would end up defining his life. Manoj currently has the largest collection of Hindu statues in the country — but it was after a stint at an ashram in San Diego that he realized that it wasn’t about the object itself, but the story they represented.  “There’s a reason that oral traditions exist,” he says. “If I just tell you facts and figures of philosophy, two areas in your brain will light up. But if I tell a story, 20 areas of the brain light up,” he says. It’s the psychological reason that storytelling is so compelling.

Sharing the stories symbolized by iconography that is standard in yoga studios and on festival stages alike is Manoj’s life work, a task he approaches with humor and panache. “Some people call me a spiritual standup comedian,” he says. “I have a little bit of an edge because I’m brown, fat, and have an accent. Humor puts people at ease — it’s how they get into the flow state,” says Manoj. He holds a PhD from Cornell in Chemical Physics, so he’s no stranger to science. The science behind getting people into the flow state allows his listeners to truly engage with the archetypal stories that he shares.

“There’s the symbol of these statues and their archetypes” says Manoj, “then there’s a universal mythology, and then a personal mythology of every one of us.” This triangulation of his storytelling allows Manoj to guide people toward an “aha” moment, which that allows them to find what the archetype is, and what it means personally for them.

Understanding the archetypes of Hindu mythology is helpful not only to understand the roots of yoga, but also because these kinds of myths help us get at the root of who we are as individuals, and how we show up in society. They help us understand the importance of doing the “real work,” rather than hiding the shadows behind the guises of meditations and chanting. “I’ve seen a lot of yogis engaged in what’s called spiritual bypassing,” says Manoj. “Teachers who are pretending that everything is joy,” for example. “One has to realize that being human means we all have a shadow.”

As does everyone, yogis need help addressing the shadow within. Manoj’s teachings integrate the idea of shadow work through the discussion and dissection of archetype theory. He brings psychologists into his workshops in order to take the presentation of mythology a step further. This kind of intentional storytelling allows not only for the investigation of the myths behind the practice, but how they may inform and show up in our own lives.

“I’ll help people find what their archetype is, and then what the symbols mean,” says Manoj, a practice that is very common with yogis in India, called samatha meditation. “You meditate in front of your archetype — the statue — and the statue is a portal to the infinite,” he says. This type of meditation and mantra opens the eyes to one’s own archetype. This contextualizes a person’s experience within a broader whole. And of course, “the context changes because your life situation changes. So these archetypes can change in your life with time,” he says.

Using Archetypes as Vehicle Toward Enlightenment

“The mind is very susceptible,” says Manoj, “it’s like a vacuum that sucks in all the energies of these symbols.” The goal of this kind of archetype rumination — like so many yogic practices — is to find a calm mind. “The same mind that can wander all over the place can be a vehicle for enlightenment,” says Manoj. Understanding how to use these archetypes as a focus for meditation and mantra is one way to release thoughts, and encourage the cultivation of a calm mind.

“The space between your thoughts is who you really are,” says Manoj. “Let the thoughts come,” he says, “and each time you chant, it’s like a windshield wiper that wipes the thoughts clean. Each time you do so, the gap increases, and your mind is able to open to your archetype.”

Experience this kind of deep teaching with Manoj in person at SYF this June! Tickets on sale now: https://bit.ly/SYF22Tix

Take it a step further with Manoj, and join him for an India Pilgrimage November 30 – December 18, 2022! Experience the South India yatra of a lifetime, and truly go “inside.” In typical comic fashion, Manoj has deemed the trip Kali Yuga Buster Yolo India Yatra of a Lifetime (KYBYIYL for short) — it’s guaranteed to be a once-in-THIS-lifetime experience you won’t want to miss. Tour details are available here. Contact Manoj directly for more information: mikechalam@yahoo.com or on his cell at 858-735-4869.